The Solar-powered display system can be installed both as a way-finder and as a timetable, in railway and bus stations. The product consists of two 32 inch back-to-back displays with E-Ink technology, one a black-and-white module, the other using the latest E-Ink panel in a colour version.

This innovative solution derives from an optical component of a film used in Electronic Paper Displays, commonly referred to as “bistable” , which means that the image is retained even when all power sources are removed. Consequently the display only consumes power when the content changes. The display system does not require any cables, either for the transmission of data or for the power supply, being equipped with a wi-fi system and a built-in solar panel.

The product will made its European debut at Innotrans fair in Berlin , from 23rd to 26th September at GDS’ booth , while the American one will be at APTA EXPO in Houston , from 13th to 15th October, where GDS will be pleased to show its business-critical turn-key solutions for the railway and transportation industry. 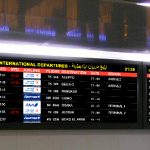 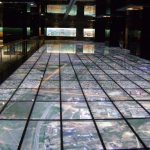 GDS leads in the world’s largest ever FLOOR DISPLAY installationNews